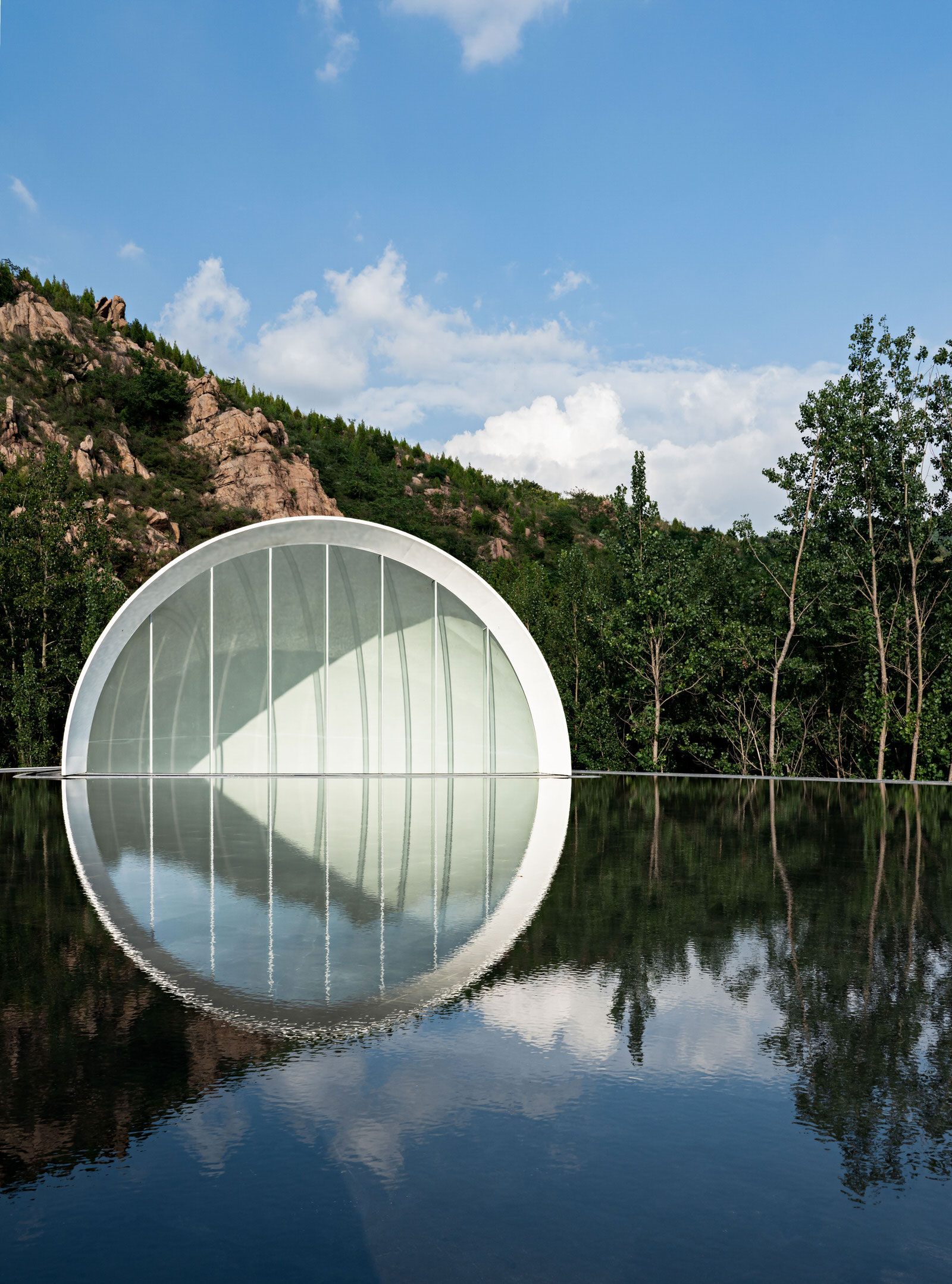 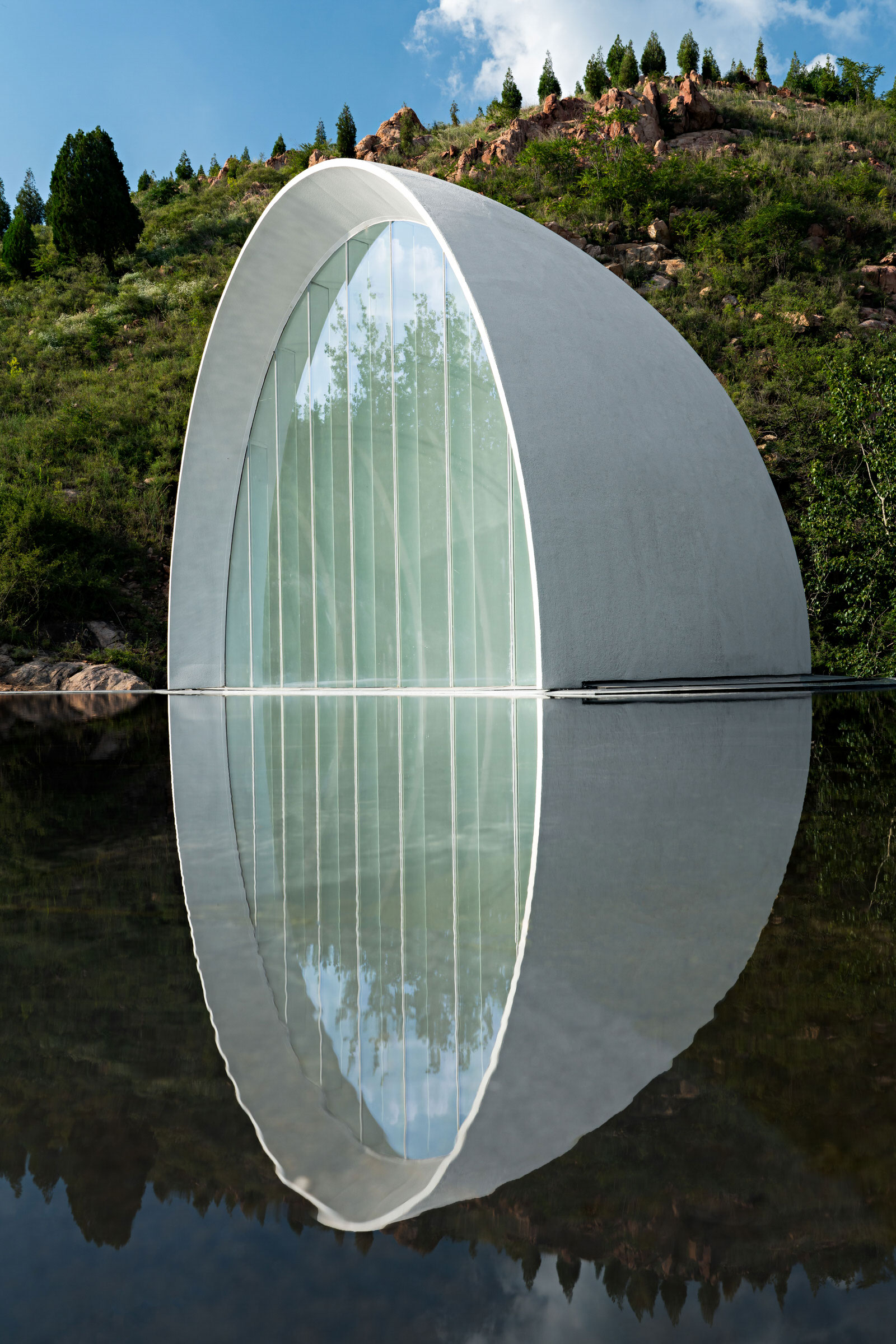 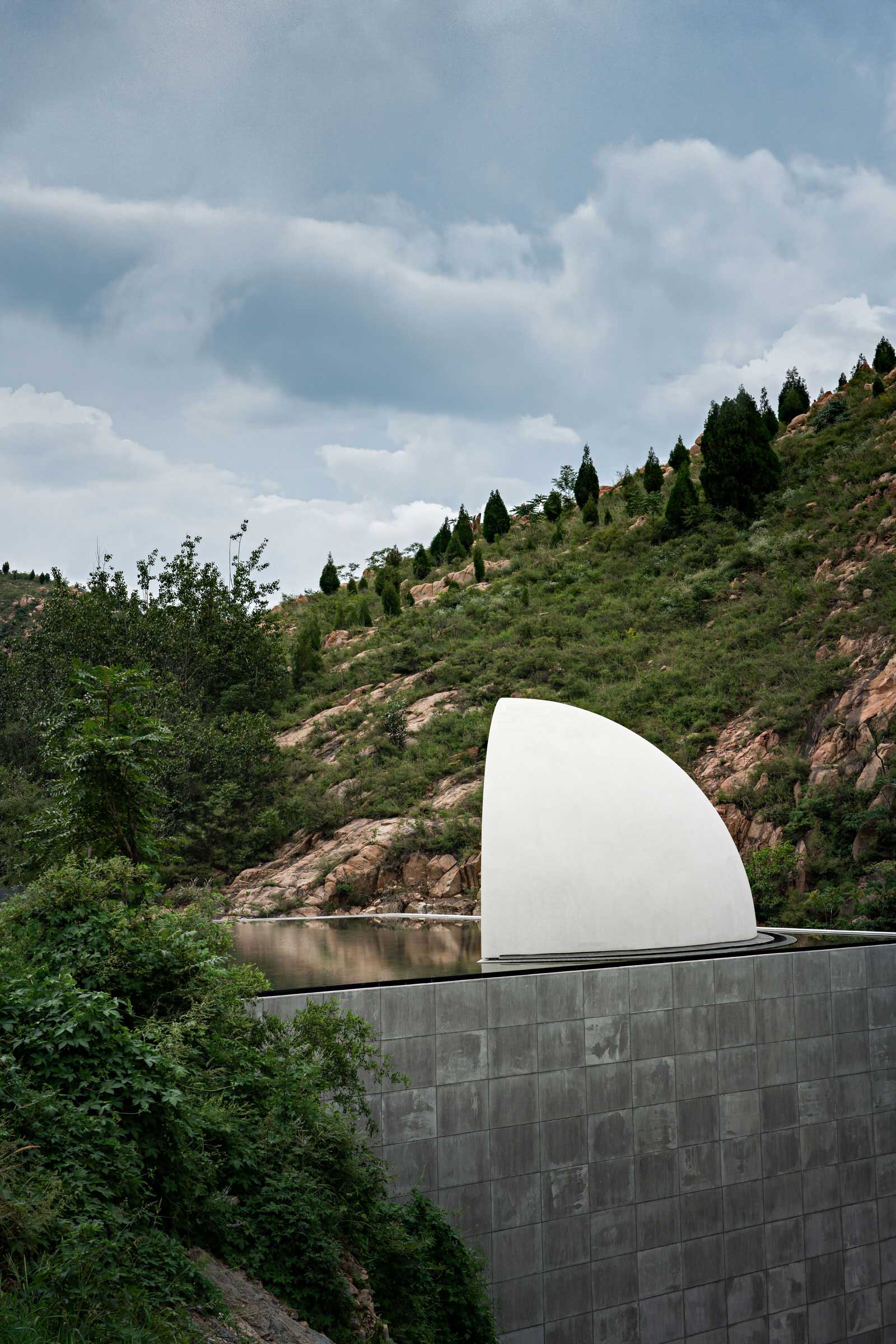 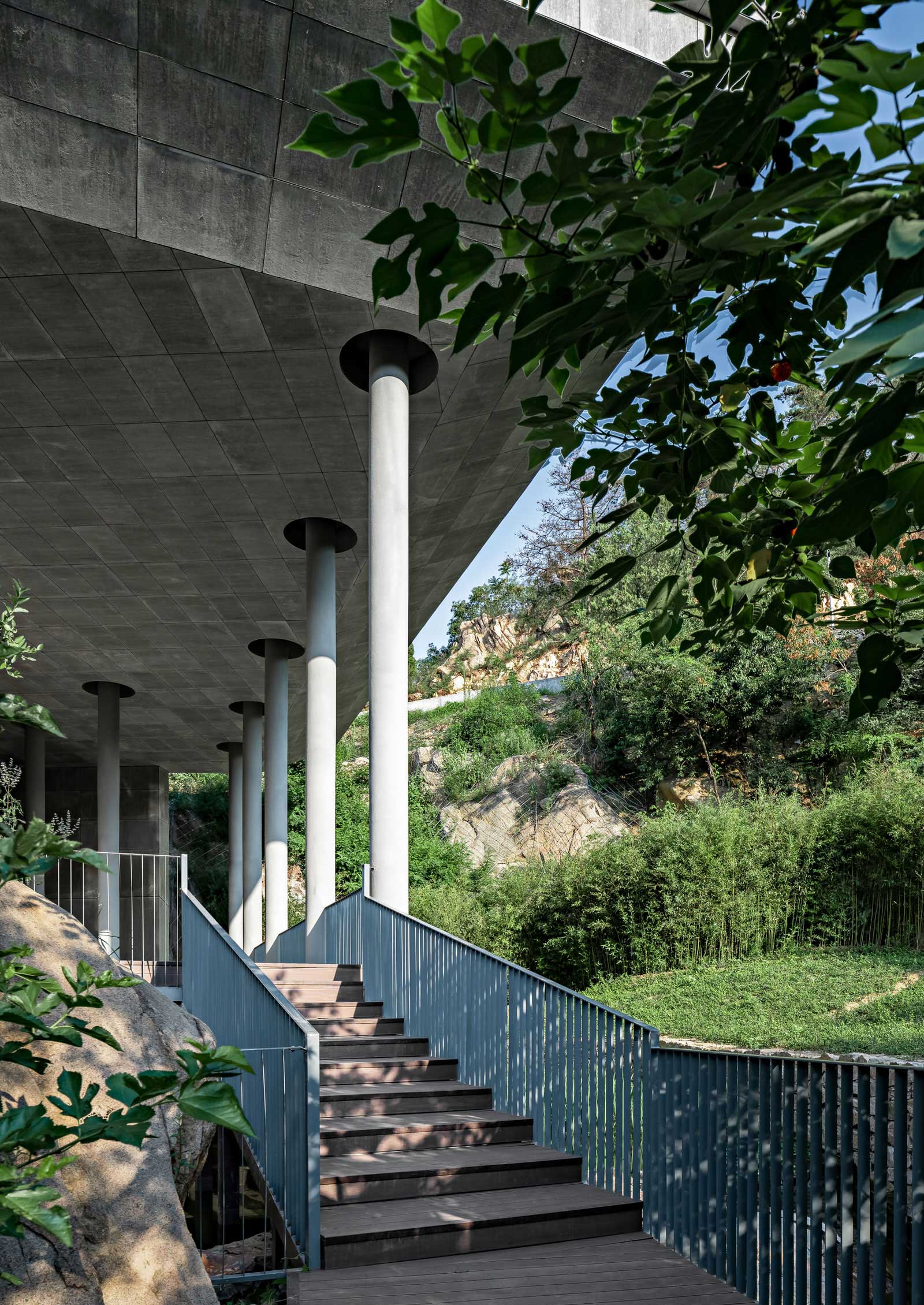 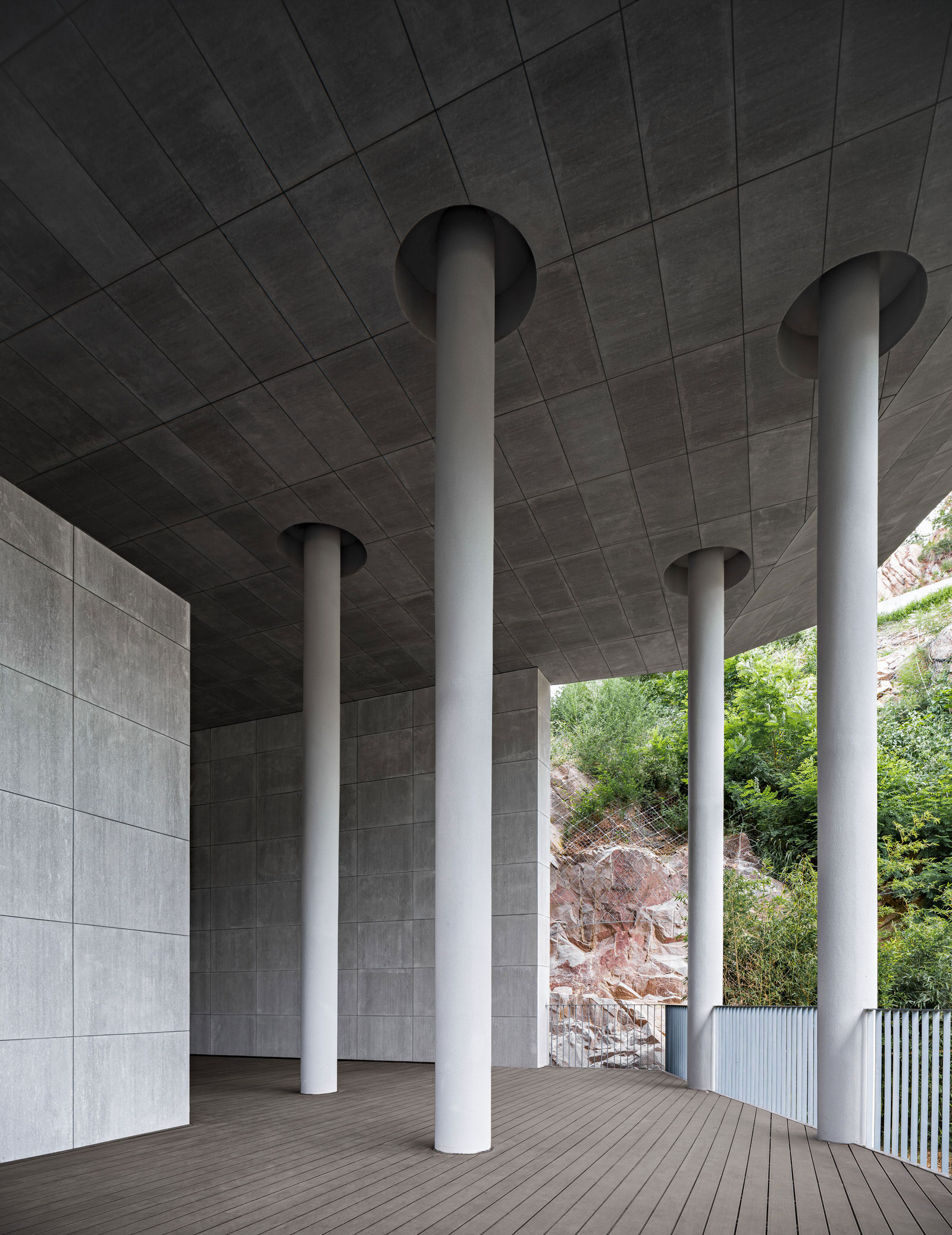 One of my favourite quotes I once came across is — ‘The moon stops for you’. The protagonist was given this line as a declaration of love from her crush. I can’t help but remember that line when looking at Syn Architects’ Hometown Moon. Instead of the moon stopping for us, chief architect Zou Yingxi constructs a moon to stop us in our tracks for admiration at different times of the day.

Nestled in Tai’an City, China, Hometown Moon is a two-storey chapel that’s part of an urban development commissioned by Shandong Lushang Group. Located in the picturesque Nine Women’s Peak, the project aimed to develop an area of 55 square kilometres within the mountainous terrain while methodically weaving in various villages. 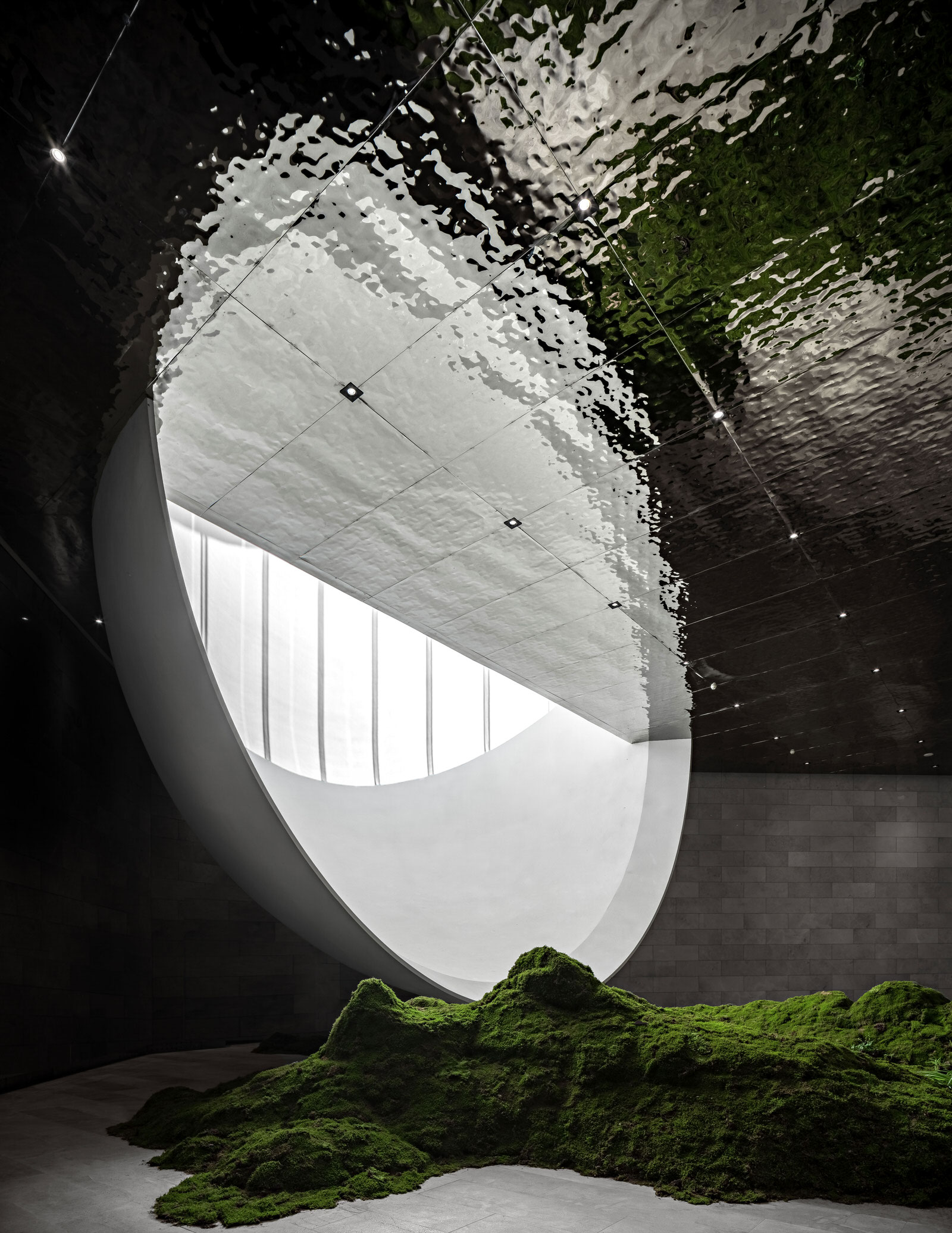 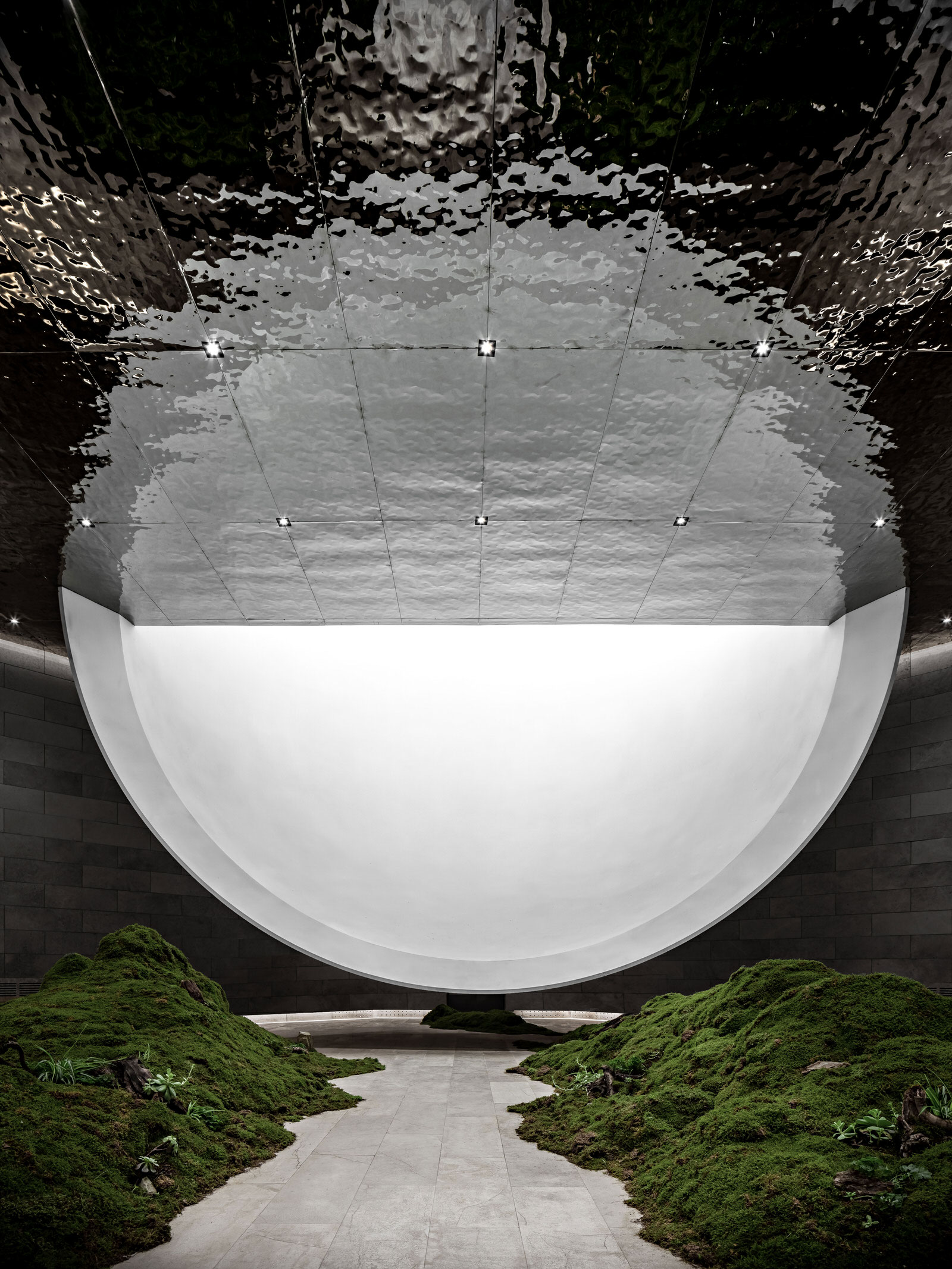 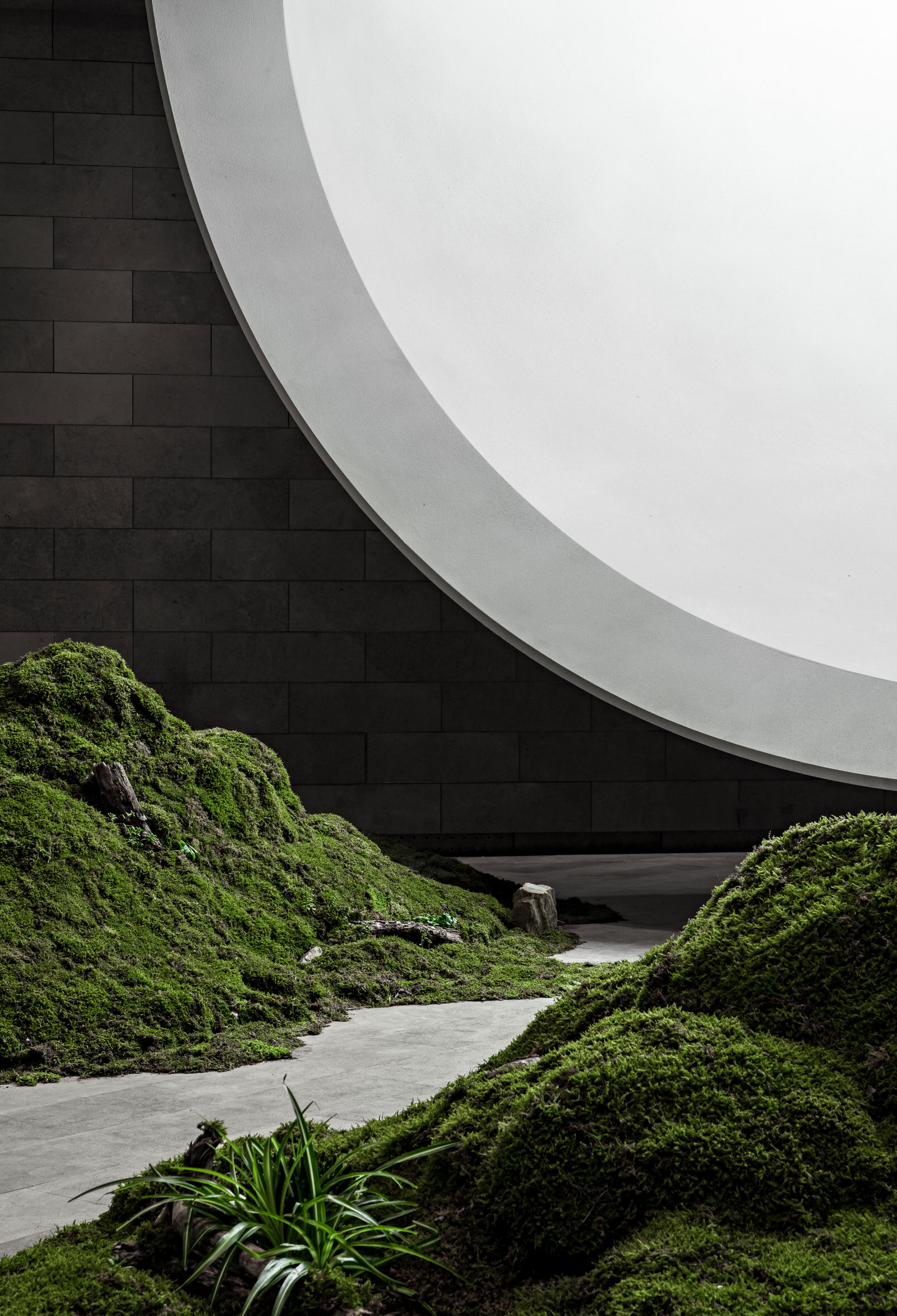 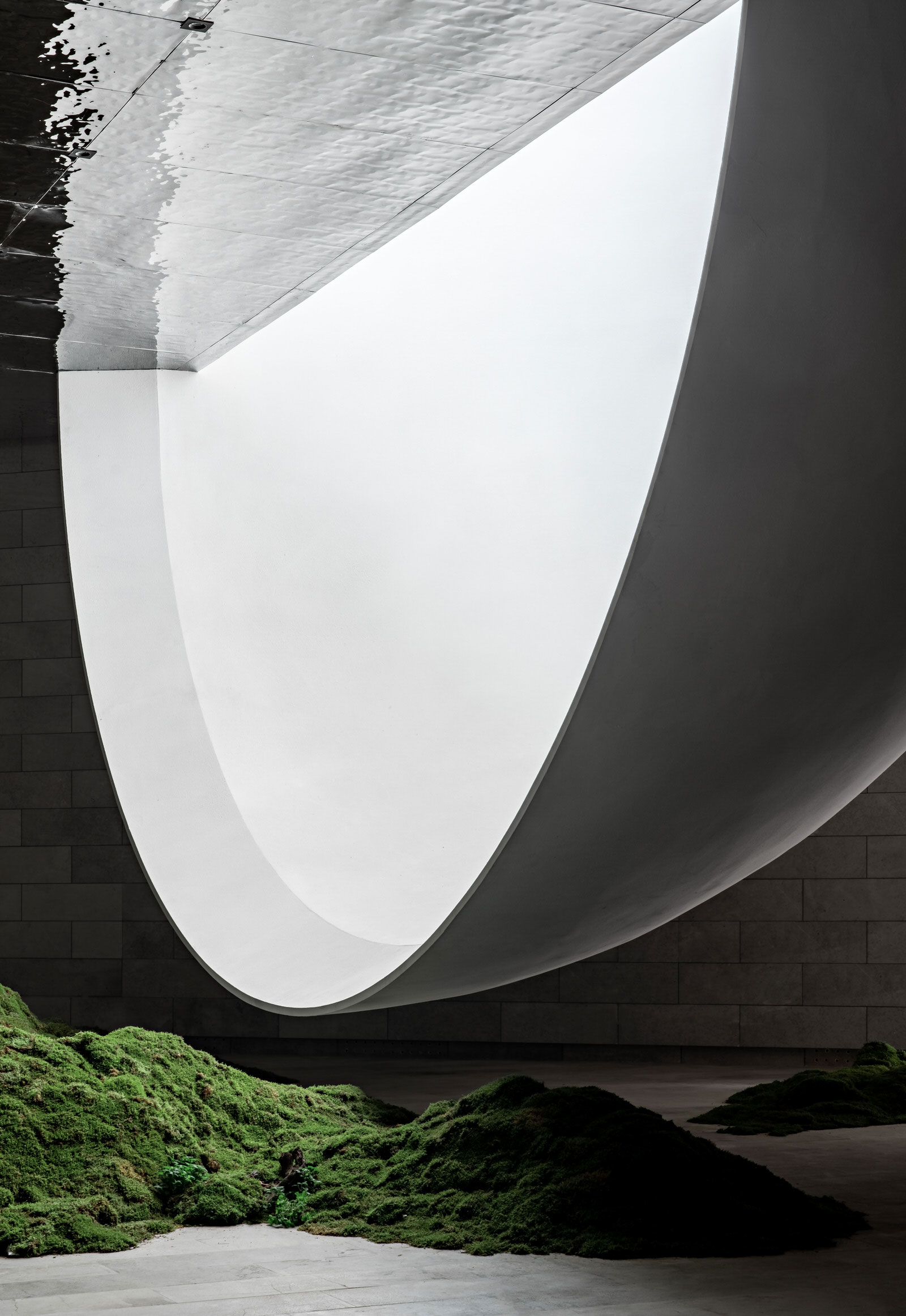 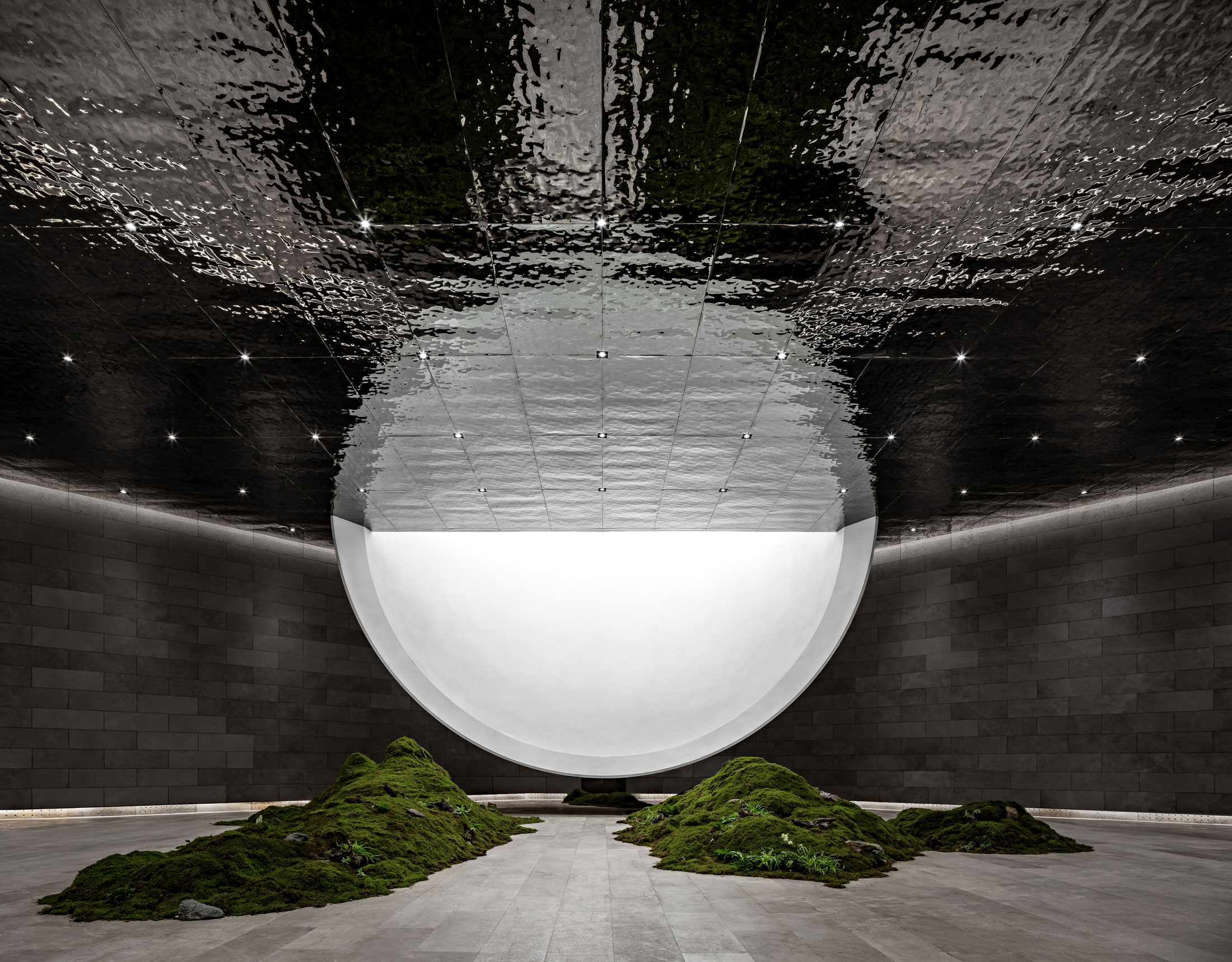 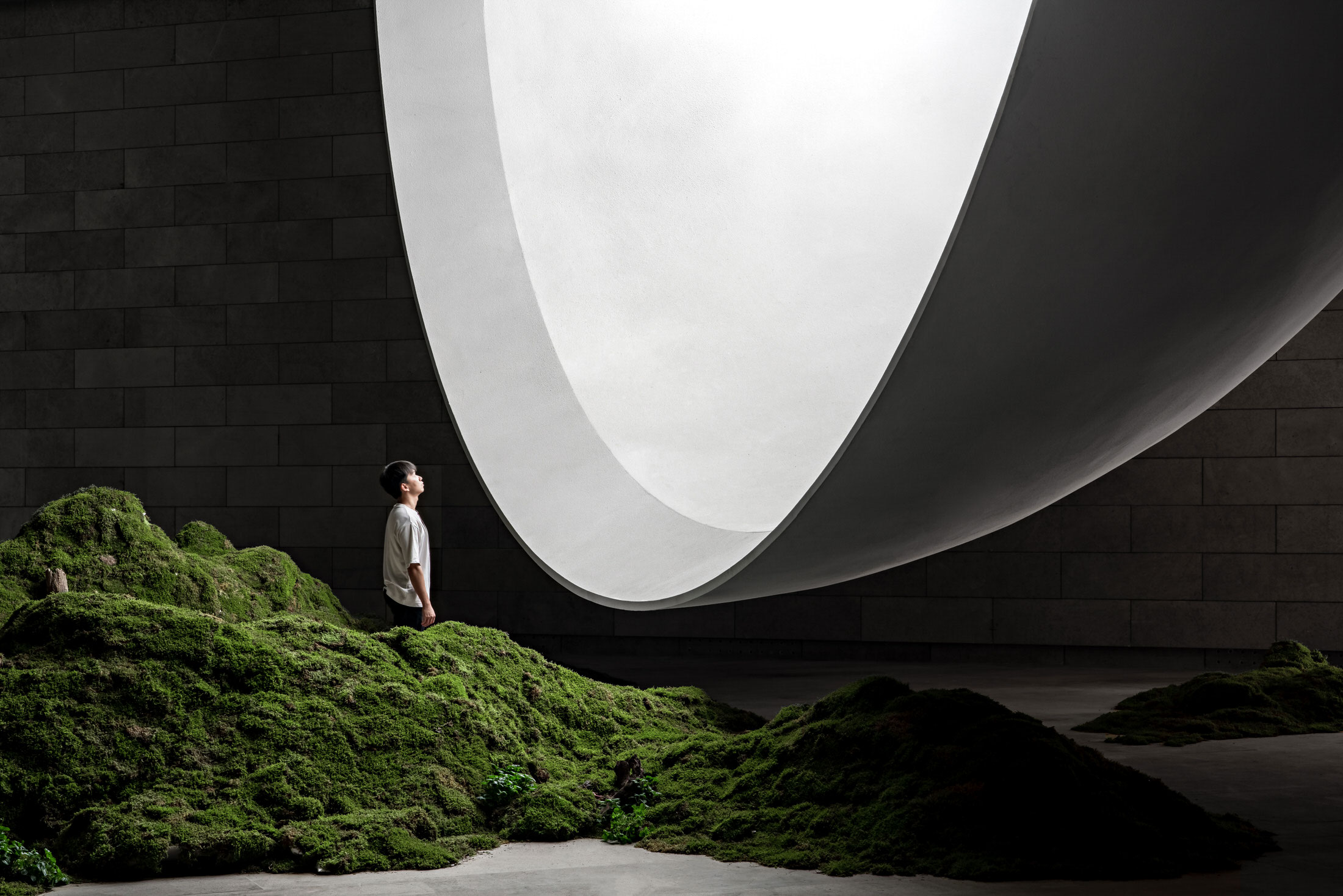 Part of the development included a Hometown Cloud — a pavilion serving as the main tourist attraction as well the central point of the area. Though successful at the beginning, the slowing of tourist attraction prompted the development of Hometown Moon Chapel, a scenic attraction that would reinvigorate the allure of the area. It was also an opportunity for the design team to demonstrate an architectural piece equally monumental towards the site and to the narrative of the area as well.

At just under 1,500 square metres, the chapel features a large concrete moon sphere positioned carefully in the prime location of the Nine Women’s Peak, avoiding visual disruption while waiting for further integration from the surrounding foliage. From afar, the moon is seen half risen on the roof made of shallow platform of water that delicately reflects its other half. Descending from the roof connected by a staircase reveals a generous open balcony that captures the lushness of the mountains. 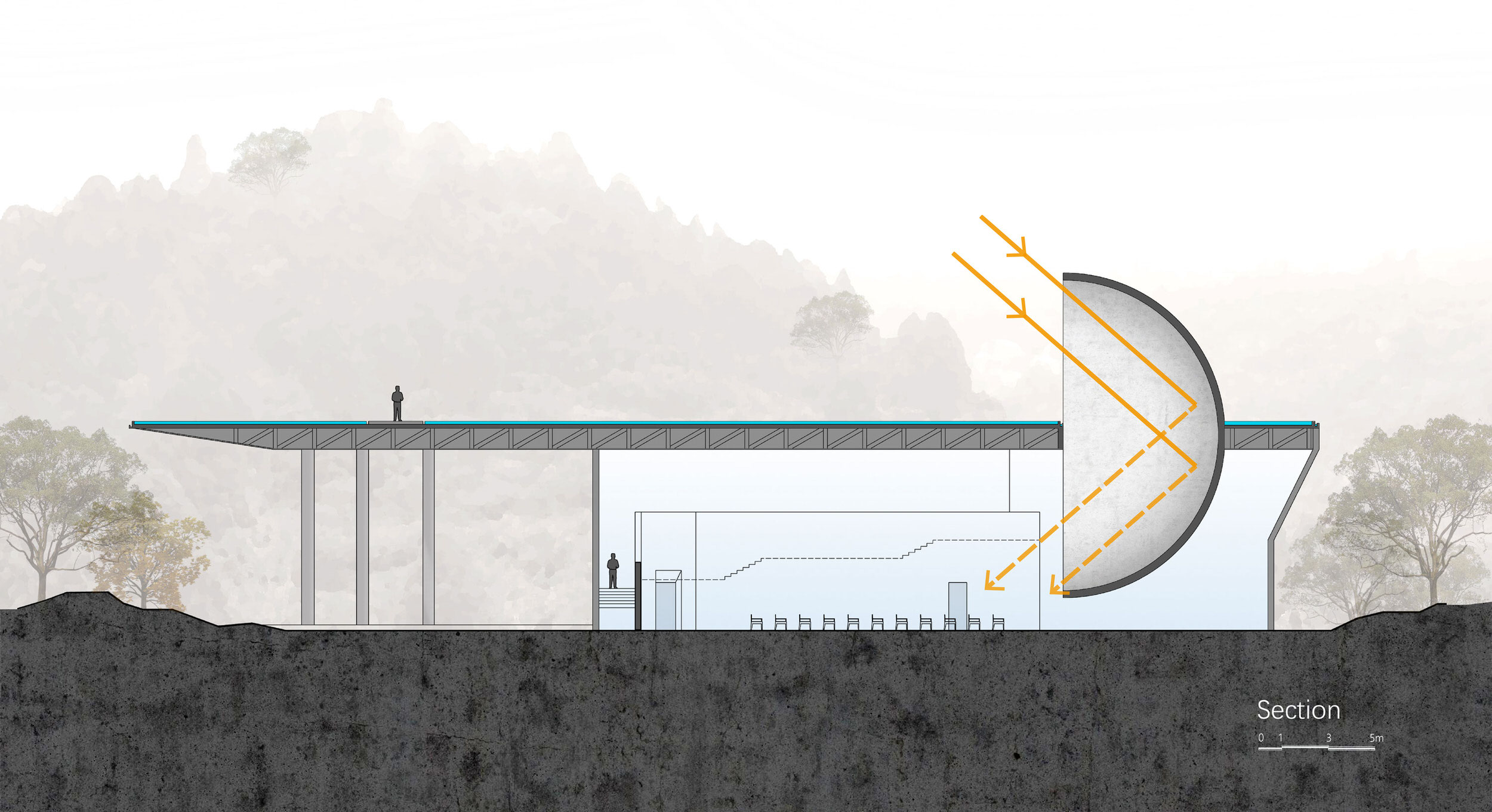 Section Drawing of The Hometown Moon Chapel by Syn Architects

Heading below reveals a space held by pilotis while framing a venue space for socialising, ceremonial, and spiritual gathering. As natural light dips into the concave of the moon, the enclosed space is filled with majestic awe from the architectural lunation. Added with a serene landscape made with patches of mossy terrain and the reflective ceiling, it allows us to appreciate the architectural installation up close.

Accessing Hometown Moon Chapel equates to the experience of traversing the beloved Chinese Calligraphy paintings. Just as every painting begins with a bridge or a pavilion or a boat, visitors must begin their pilgrimage at the carpark to abandon their connection to the metropolitan area. Afterwards, like one must move their eyes upwards in the painting, visitors begin a journey through a curated path dotted by natural sounds of rustling leaves, flowing river and rustling trees, before finally arriving at the moon to sit and ponder the individual’s surrounding mental and physical space. 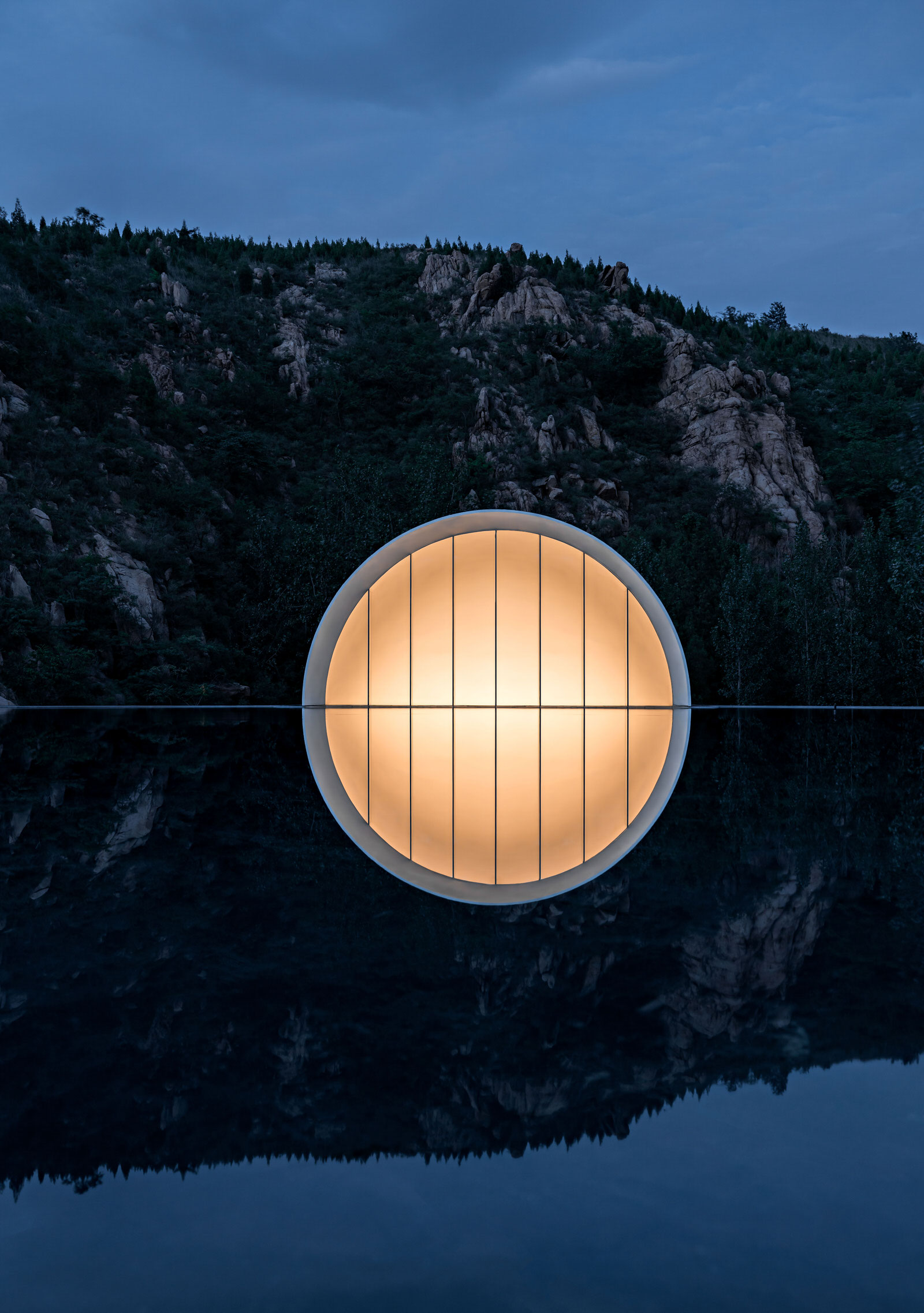 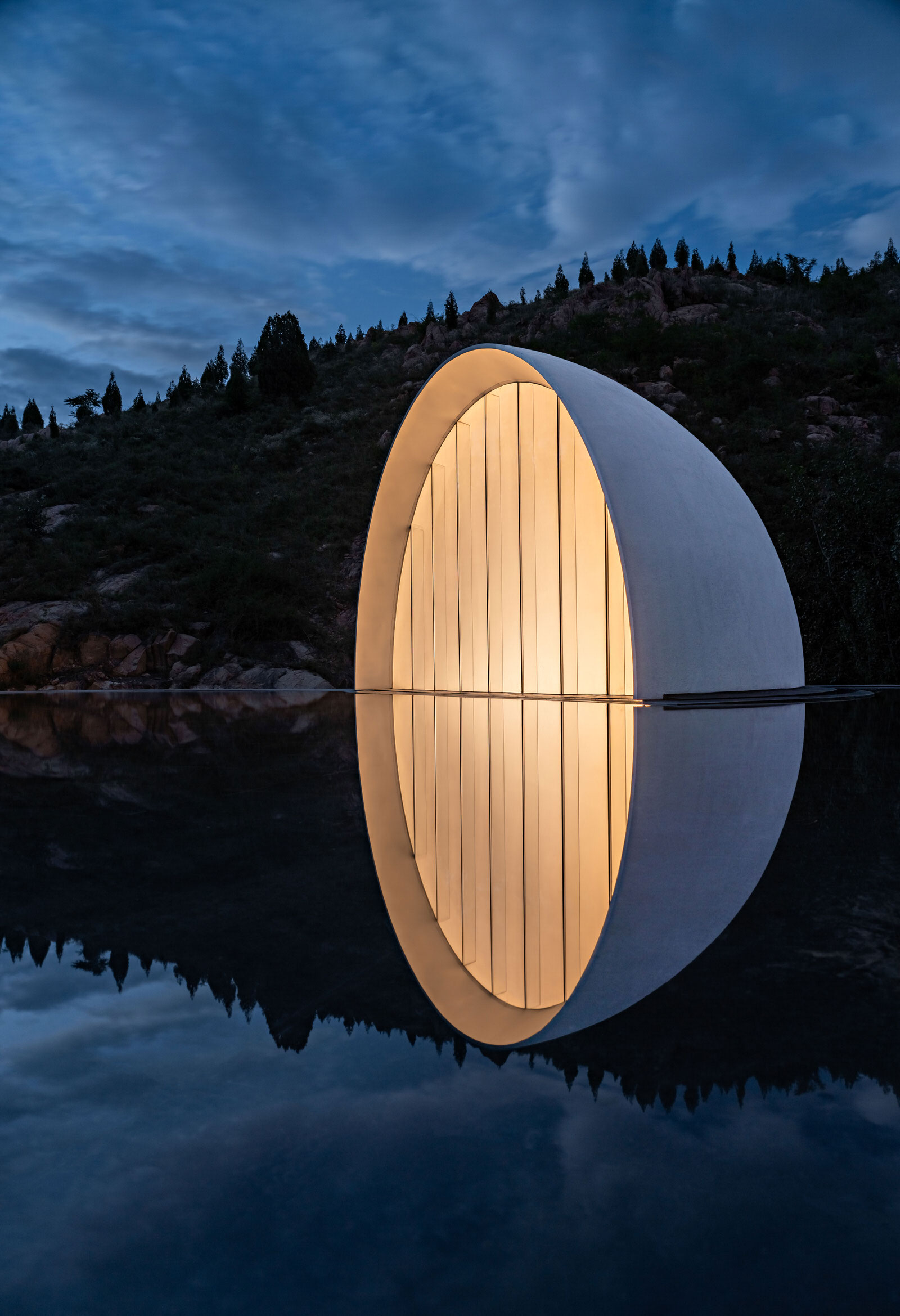 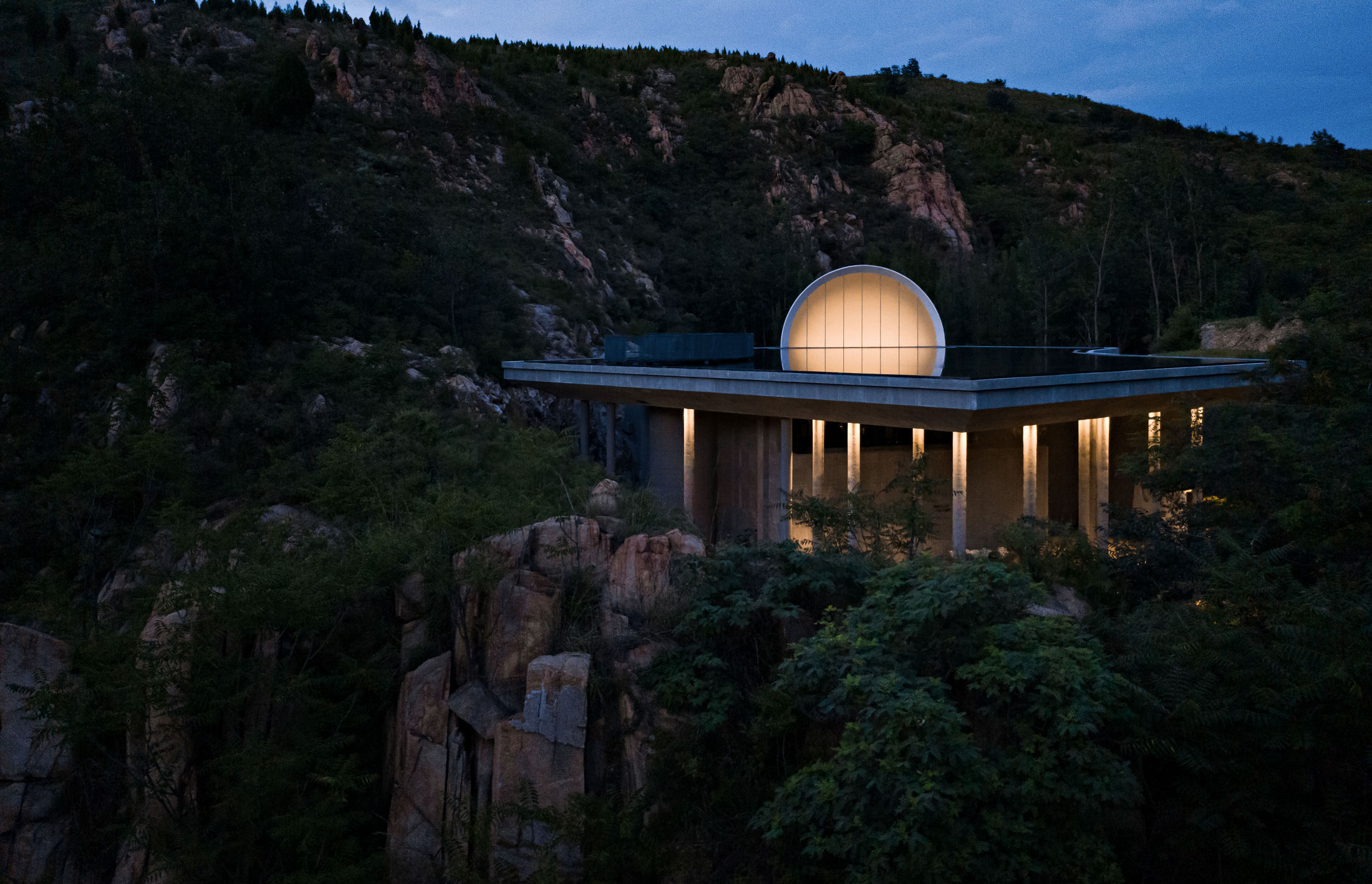 An architectural feat that equates to an installation that leaves you speechless — it truly completes the picture of the ancient Song Dynasty poem — “the clouds and the moon remain the same, but mountains and rivers evolve throughout time”.

Related: Building with Sun, Water and Air: Hiroshi Sambuichi’s Subterranean Installation at The Cisterns in Frederiksberg.